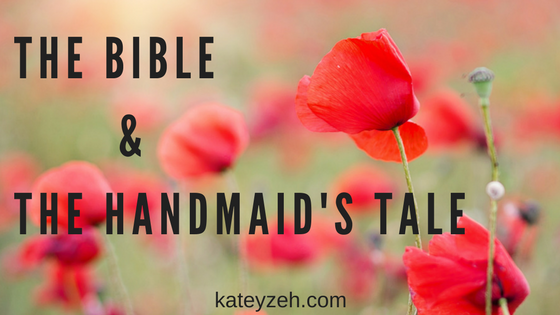 The Hulu series The Handmaid’s Tale, based on Margaret Atwood’s 1985 dystopian novel, is a chilling look into a fictional future in which women are stripped of their rights and dignity, rape is sanctified and ritualized, fertility is a commodity, and those who resist the theocratic regime are executed on the spot.

In watching the series I was struck by how the organization of this fictional society is tied to specific biblical passages and themes, many of which I have been studying and writing about in my forthcoming book Women Rise Up. I’ll share some of my insights into the biblical allusions throughout the show, so we can make better sense of the theological underpinnings that shape this dystopian world.

The fertile women who are captured and forced to become handmaids (sexual slaves) for the upperclass families are brought to the Rachel and Leah Center. At the beginning of the monthly “ceremony”–the ritualized rape of the handmaid at the hands of her master, the Commander, and her mistress, the Commander’s wife–the rite begins with the Commander reading aloud from Genesis 30:1-3:

And when Rachel saw that she bare Jacob no children, Rachel envied her sister; and said unto Jacob, “Give me children, or else I die.” 2 And Jacob’s anger was kindled against Rachel: and he said, “Am I in God’s stead, who hath withheld from thee the fruit of the womb?” 3 And she said, Behold my maid Bilhah, go in unto her; and she shall bear upon my knees, that I may also have children by her. 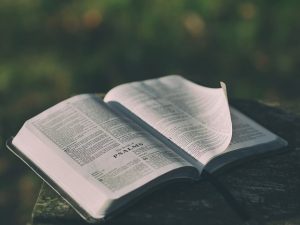 In the biblical story Rachel struggles with infertility for years while her sister Leah who is also married to Jacob (that’s another story for another day) has no trouble getting pregnant. Fearing for her place as Jacob’s favorite wife Rachel forces her handmaid–a slave named Bilhah–to become her surrogate. This pattern of abuse among women of different classes appears several times in the Hebrew bible. Earlier in the book of Genesis Sarai (whom we also know as Sarah) coerces her handmaiden Hagar into a forced marriage with Abram (Abraham) to produce a male heir. While the term handmaid is found primarily in the Hebrew texts, there is a notable use of it in the Gospel of Luke when Mary, the mother of Jesus, refers to herself as a “handmaid of the Lord” when she learns that she is pregnant.

While most infertile women are sent to the colonies to clean up nuclear waste, some of them are designated as cooks and cleaning staff who serve in the Commanders’ households. These women are called Marthas.

In the Gospels Martha of Bethany is a friend of Jesus. She and her sister Mary offer him hospitality in their home. While Mary talks with Jesus, Martha is busy at work.

38 Now as they went on their way, he entered a certain village, where a woman named Martha welcomed him into her home. 39 She had a sister named Mary, who sat at the Lord’s feet and listened to what he was saying. 40 But Martha was distracted by her many tasks; so she came to him and asked, “Lord, do you not care that my sister has left me to do all the work by myself? Tell her then to help me.” 41 But the Lord answered her, “Martha, Martha, you are worried and distracted by many things; 42 there is need of only one thing. Mary has chosen the better part, which will not be taken away from her.” Luke 10:38-42

While this passage is often interpreted to mean that Martha is slaving away in the kitchen while Mary listens to Jesus, there is no textual evidence to that end. This is a popular understanding of this passage, however, so it helps us understand the domestic role that Marthas play in Gilead.

Arguably the most severe of all characters in the series, the Aunts are charged with keeping the handmaids in their 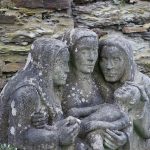 place. When a handmaid strays from their strict rules, they resort to inhumane punishment and torture tactics often citing biblical passages as their justification. They literally apply Matthew 5:29: “If your right eye causes you to stumble, gouge it out” in their maiming of the handmaid named Janine.

Aunt Lydia is most prominent in the series. In the Christian scriptures Lydia appears in the Book of Acts as one of the early converts to Christianity and is called a “worshiper of God.” Perhaps Atwood chose this name for the abusive matriarch of the handmaids to highlight her full conversion to and participation in the ideology of Gilead. Like any new believer Lydia is zealous to a fault and unquestioning of the system that requires the complete dehumanization of every woman she encounters.

What do you think of these connections? Are there other biblical themes that you noticed throughout the series or book? Please feel free to share in the comments!